My life has been unconventional to say the least. I’ve reinvented myself dozens of times and will continue to do so throughout my life. This is not something I am proud of or ashamed of- it just is. In fact, I still struggle with every transition. For most, this is not an ideal way to live at all. There are are no certainties, normalities, or concrete stability in my world. However, I’m a writer at heart and I believe in order to write authentically, I must experience ever corner of life (the seemingly unattainable, the darkest depths, and the simplest pleasures). This is a crucial and unusual part of my creative process.  One of my most interesting chapters was spent as a Bunny in Las Vegas.

Let me preface my story by first explaining the difference between a Playboy BUNNY and a Playboy PLAYMATE. A Bunny and a Playmate are two separate entities. Playboy Bunnies are dealers, waitresses, hostesses, coat checkers, etc. who primarily work in Playboy Clubs (with occasional promotional modeling appearances in their Bunny costumes). Bunnies typically do not pose in Playboy magazine. Playboy Playmates are models who pose in the infamous magazine and are not associated with The Playboy Club. This is a common misconception. Now, can a Bunny pose and overlap if she chooses to? Sure, but it’s not pushed nor required and it certainly isn’t the definition or the essence of being a Playboy Bunny. That is a completely separate path.

Having said that, in 2010, I found myself sitting in a room with several gorgeous women (including my best friend, Max) waiting for my name to be called. I remember nervously placing my nails to my lips and then immediately retracting them to my lap. I had a habit of biting my nails when I was anxious but, conscious of this nasty tendency, I reminded myself how important hand presentation was as a black-jack dealer. Especially for this job. Appearance was everything.

I had auditioned to be a Playboy Bunny Dealer THREE times over the past two years and received critiques that had apparently prevented me from being hired. Not enough curves, my legs were too skinny, my hair wasn’t blonde enough, my hair wasn’t nice enough, my make-up was too light, my eye make-up was too heavy, I didn’t have enough experience as a dealer… in other words, I never got past the first panel of judges. Nonetheless, I wanted this position. I wanted to be a Bunny. So I was tenacious in my pursuit and that day I hoped that this audition would procure a different outcome. I had  two years of experience dealing black-jack in a party pit at The Hard Rock Casino. Not a bad first gig for a girl fresh out of dealing school. However, in my opinion, becoming a Bunny was the creme de la creme of all dealing jobs for a female living in Vegas. & although they had made it clear that they didn’t want me, I was more determined to prove that they did. I think it’s also worth mentioning that this was Max’s FIRST time applying to be a Bunny Dealer.

I can’t recall if Max auditioned before or directly after me but we both made it to the second round of auditions. I was elated! The next part of our tryout required us to be fitted in the Bunny costume (re-designed by the Italian fashion designer Robert Cavalli). I believe there was four to five of us being fitted by the Bunny seamstress. The experience was surreal and chaotic. The suits were suffocating and not as comfortable as I had envisioned. Max and I helped each other squeeze and jump into our Bunny suits and place our bunny ears just right, making jokes along the way to ease the tension. Once again, we were presented in front of a panel of judges and this time we were required to deal and chat. I remember hearing Max kill her audience with her charm and humor. Yet, I don’t remember my own audition myself- probably due to anxiety. But for whatever reason only Max and I received a call back that next day. We were the last two standing and as far as we knew there was only one opening that they planned on filling. We were both thrilled that it was down to the two of us. We were rooting for ourselves but also for each other.

The final day of auditions arrived, we showed up and walked in together- I picture hand in hand and singing to one another but I think that’s a vast exaggeration. Once again, we helped one another wriggle into our Bunny suits. The Bunny Mom took us to George Maloof’s office one at a time. I remember he asked me to do a twirl and asked me two questions: 1. What was my name? and 2. Why did I want to be a Playboy Bunny? I’m not sure I answered even the first question correctly but I walked out of his office without tripping in my heals so I called that a win. The Bunny Mom left and came back about 5 minutes later with a smile on her face. She looked at Max and said, “He said yes!” I immediately squeezed her hand. “And you…” she paused dramatically with a frown. “You…made it! He wants you both.” My heart leapt. Not my idea of a clever joke but I quickly overlooked her blurred sense of what was funny and what was cruel. In fact, I couldn’t have cared less. I made it and so did my best friend. We were officially Playboy Bunny Dealers, employed at The Las Vegas Playboy Club located on the 52nd floor of the Fantasy Tower at the Palms Casino. That’s what it took. Three ‘hell no’s’ and one ‘yeah, sure.’ Four times and I had earned my cuffs & collars, my bunny ears, and a cottontail to boot. 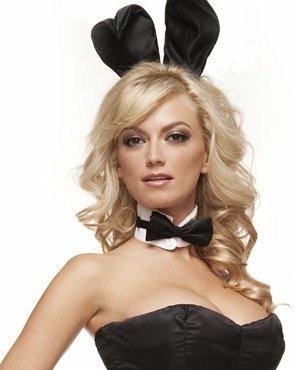